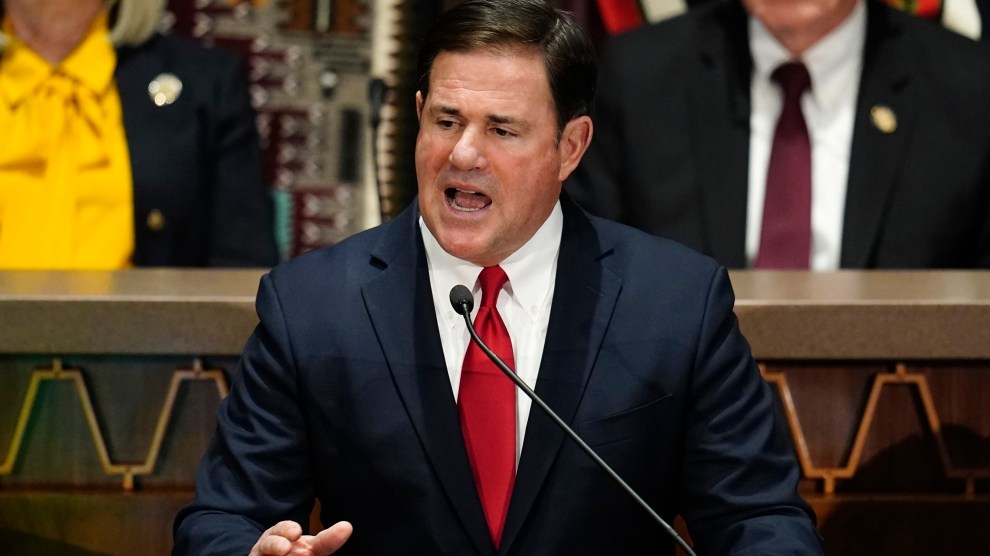 The Department of Justice filed a suit yesterday against an Arizona law that will require people to provide proof of citizenship to vote by mail or in federal elections. Assistant Attorney General Kristen Clarke called the law a “textbook violation of the National Voter Registration Act.”

Ever since the Supreme Court gutted the Voting Rights Act in 2013—and even before—state legislatures across the country have found creative ways to roll back the right to vote, from instituting voter ID requirements to limiting mail voting to passing rigged election maps.

Arizona has been at the forefront of one part of that movement: a push to require proof of citizenship to participate in elections—an onerous obligation that could prevent many Americans from casting their ballots. In 2004, it passed a ballot initiative that required prospective voters to provide documentary proof of citizenship in addition to completing the federal voter registration form. As Nina Perales of the Mexican American Legal Defense and Educational Fund told NPR at the time, the proof of citizenship law sent voter registration plummeting 44 percent in the state’s most populous county—and 80 percent of people whose registrations were denied were non-Hispanic whites.

In 2013, a Supreme Court decision written by Justice Antonin Scalia struck down that Arizona law. (Justices Clarence Thomas and Samuel Alito dissented.) That decision basically said that a state could not supersede the federal voter registration form—which requires only that prospective voters attest to their citizenship under penalty of perjury—by imposing additional requirements on people who wanted to vote in federal elections. States could, however, create their own requirements for participation in state-level elections. This created a class of federal-only voters who registered to vote in Arizona but did not provide documentary proof of citizenship by submitting documents like birth certificates or passports.

But the Supreme Court’s decision didn’t stop Arizona from passing a law in March that requires people who want to vote in federal elections, or by mail, to prove their citizenship.

And the Republican lawmakers who instituted this citizenship requirement knew it was unconstitutional. According to the DOJ filing:

When voting to approve the bill in Committee, Vice-Chair of the Arizona House Rules Committee and House Speaker Pro Tempore Travis Grantham acknowledged that Congress and the Supreme Court had invalidated the State’s past efforts to impose DPOC on federal-only voters, but stated that trying again “is a fight worth having.”

That doesn’t bode well for the law holding up in court. State Attorney General Mark Brnovich, who is running against a slew of other Republicans for the chance to take down incumbent Democratic Sen. Mark Kelly in the general election, claimed that DOJ’s lawsuit was an attempt to allow undocumented immigrants to vote. This almost never actually happens.