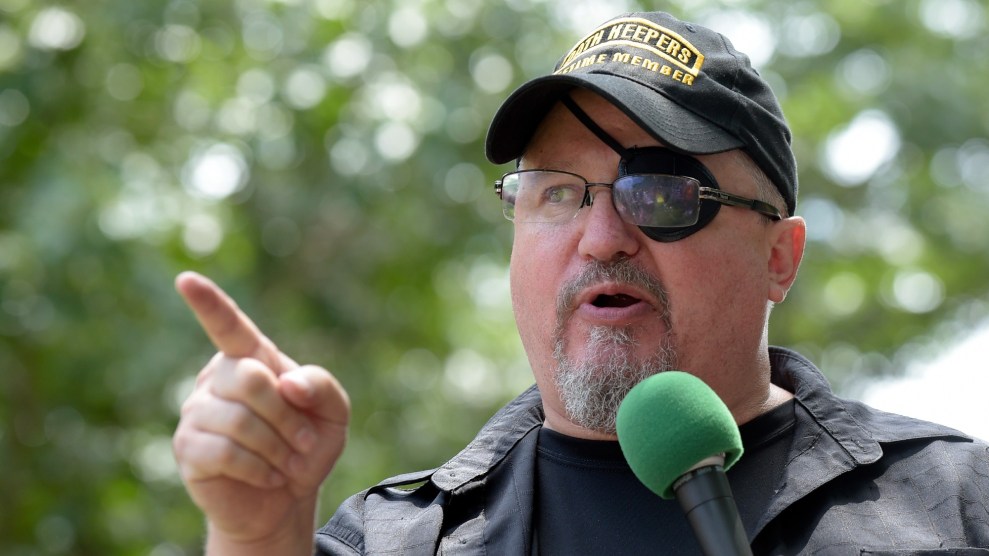 A former spokesman for the Oath Keepers militia group is set to testify Tuesday at a January 6 committee hearing on the role that the organization and other extremists played in efforts to overturn the 2020 election.

Jason Van Tatenhove, a Colorado resident and former tattoo shop owner, is scheduled to appear to detail his work as a national media director for the Oath Keepers in 2015 and 2016 and what he says was the group’s radicalization during that period. Van Tatenhove, who now works as an independent journalist, was apparently close to Stewart Rhodes, the group’s founder. Van Tatenhove disclosed his plans to testify at a live hearing this month on his Substack and to a Colorado news outlet. A person familiar with the committee’s plans confirmed that Van Tatenhove is one of multiple former extremist group insiders slated to testify Tuesday, July 12. Van Tatenhove declined to comment to Mother Jones.

Tuesday’s session will be the panel’s first hearing following the explosive June 28 testimony of former White House aide Cassidy Hutchinson. Among other things, Hutchinson indicated that Trump knew that many of the supporters he urged to march on the Capitol on January 6 were armed. On Friday, the committee privately interviewed Trump White House counsel Pat Cipollone, who appears to be in a position to confirm or dispute some of Hutchinson’s claims. Hutchinson’s testimony indicated, for example, that Cipollone was present when Trump reputedly expressed approval of the attack on the Capitol while it was occurring. She also said Cipollone had warned that Trump’s plan to personally join supporters outside the Capitol was illegal. Such a warning could help prosecutors establish that Trump knew his efforts to interfere with the certification of electoral votes on January 6 were against the law—a key element in any potential criminal prosecution of Trump over that matter.

It is not clear, however, whether Cipollone actually addressed those issues in his interview with the committee. He was expected to decline to answer some questions by asserting that some conversations were shielded by executive privilege. The committee left it unclear Friday how much that ruled out. “He’s been a cooperative witness within the parameters of his desire to protect executive privilege for the office of general counsel,” a committee source said, according to NBC News.

Tuesday’s hearing will reportedly be led by Democratic Reps. Jamie Raskin of Maryland and Stephanie Murphy of Florida, two committee members who so far have played no public role in its hearings. The panel is expected to focus on the role of extremist groups in the January 6 attack. Rep. Adam Schiff (D-Calif.), another committee member, said on CBS News last week that the hearing will examine “financing” for the mob that stormed the Capitol and the participation of “white nationalist groups like the Proud Boys, the Three Percenters, and others.”

The hearing will also include discussion of the history of those groups. The Oath Keepers were founded in 2009, largely in reaction to Barack Obama’s election. They recruit former military and law enforcement officers, though they accept others, and they claimed to advocate adherence to constitutional principles they accused Obama of threatening. They gained notice by providing armed security at confrontations between the federal government and far-right protesters. In recent years, they appeared at racial justice protests, where they often said they were guarding businesses against looting and vandalism.

Van Tatenhove is expected to detail how Oath Keepers’ founder Stewart Rhodes used conspiracy theories and extreme causes to increase the group’s membership and prominence. Rhodes, along with 10 other members of his group, was charged in January of this year with seditious conspiracy in connection with the January 6 attack. Members of the group wearing fatigues and body armor—including several who employed what prosecutors have said is a special formation used to move through crowds—stormed the Capitol that day. Prosecutors have alleged Rhodes, who did not enter the Capitol building, led a conspiracy aimed at interrupting Congress’ proceedings and helping Trump remain in office. Rhodes remains incarcerated and has pleaded not guilty. Five members of the neofascist Proud Boys also face sedition charges in connection with January 6.

Van Tatenhove, who has not been accused of any wrongdoing, has said that he first encountered Oath Keepers in 2014, when he embedded as a reporter with them as they joined other extremists in armed standoffs in Oregon and Montana. He later accepted a job from Rhodes writing blog posts and fielding press questions, a position he held for about a year and a half in 2015 and 2016. “I was the propagandist for the Oath Keepers,” he told a Denver TV station last week.

Van Tatenhove was reportedly close to Rhodes. According to two people familiar with the group’s history, Van Tatenhove even hosted Rhodes as an extended houseguest after Rhodes’ separation from his wife.

Van Tatenhove has said he watched as Rhodes embraced increasingly radical ideas in a cynical attempt to gain influence. “He’s going to cater to wherever the money is coming in from,” Van Tatenhove told the Denver Post in March. “He knows his base, that’s where they’re at.”

Rhodes claims that he, too, would like to take part in Tuesday’s hearing. His lawyer, James Bright, told media outlets Friday that Rhodes would waive his Fifth Amendment rights and testify—if the US Marshalls Service allows him to leave the DC jail where is being held and appear live at the hearing. Bright told Mother Jones that he did not think the committee would agree. “My gut tells me they don’t have the sack to do it,” he said.

Bright also dismissed Van Tatenhove’s value as a witness. “If he hasn’t had any contact with [Rhodes] in five years, and wasn’t privy to any discussion leading up to January 6, other than a stale personal opinion, I have absolutely no idea what relevant thing he could say,” Bright said.

A committee spokesperson declined to comment on details of Tuesday’s hearing.